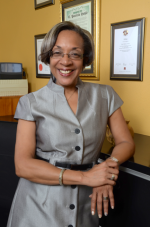 A Chartered Accountant with over twenty-five years experience in audit, business administration and financial management; she has extensive exposure to diverse sectors in the Jamaican business environment at an executive level, through hands on experience enabling her to contribute to any organisation requiring productivity, efficiency and profitability.

Her experience covers commercial and audit environments spanning the health, financial, retail, manufacturing and distributive sectors. Experiences include over five years providing accounting services for individual attorneys and as lead auditor for four audits for a major law firm.

Her background also involved leading teams, comprising accountants and IT specialists, in forensic investigations of three credit unions to successful conclusions. She has also led a team in a project commencing with design to implementation of internal control systems for the Accounts Payable Department of the national providers of potable water, and restructuring and integrating financial controls for the new information system.

A Practising Fellow of both ACCA and ICAJ, she maintains the currency of her professional qualifications by participating in seminars on ‘Train the Trainer’, IFRSs and ISAs as well as successfully experiencing the Practice Monitoring review as the “test case” under the ICAJ/IDB Project.

She is committed to the Accountancy profession, and currently serves as:

Corporate appointments include Member of the Board of the Elsie Bemand Home Trust, August 2005 to date.   She is also a member of the Business & Professional Women’s Club St Andrew.

Has also served as:

Telephone us with your questions or to schedule an appointment: